Many Davidians grimace at the thought that God’s festivals are relevant and applicable to believers in these days.  This view is clearly summarized by a recent document published by the Bashan Association of Davidians, in which they hold that to keep the festivals would be tantamount to crucifying Christ afresh. In their own words I now quote:

There are many vital truths which we can never compromise on, but there are also many non-essential points on which we may with fidelity to the message permit a difference of opinion.  Regarding truths in the first category, such as keeping the typical feasts today (clearly a part of the ceremonial law), for example, we are specifically told that “this law, of course, we today must not observe, except in antitype, for it foreshadowed things to come, particularly Christ’s first advent” (2TG 37: 14).  Brother Houteff goes on to explain that by observing the ceremonial law (of which the feasts are an integral part), we would by our actions be demonstrating “unbelief in Christ” and His atonement on the cross, whether or not it  was our intention to do so.  Compromising on such a point would be tantamount to crucifying our Saviour afresh, something no true follower of Christ would ever agree to knowingly do.[1]

The view here presented is the generally accepted view of a majority of Davidians, their “pasture” notwithstanding. So it should not be seen as a singling out of the Bashan group in this discovery.  Whether or not the author of the paragraph above is aware of it, the “first category” of “non-essential points” he has actually, and correctly, called  “truths,” yet he still condemns them as being “tantamount to crucifying the Saviour afresh.”  The question I am challenged with is simply this: “which relevant truth, can cause a Christian to, by his obedience to it, crucify the Son of God afresh?”  I am personally encouraged by Christ’s teaching which declares that, “now is, when the true worshippers shall worship the Father in spirit and in truth: for the Father seeketh such to worship him.” (Joh 4:23).  My friends, let us all become “truth”-worshippers, by His grace.

In Matthew chapter 20, the Spirit of “truth” teaches us that each team of servants/labourers that was called to work in the Master’s vineyard was called by Him alone, and not by the previous group, or by some election process of sorts.  It was simply a call from the Householder for labourers, all of whom heard His Voice—the Voice of truth.  Let’s see how the Bible treats this important subject: 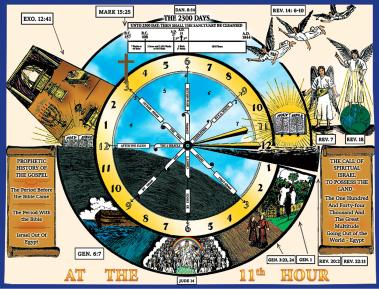 The truth of God’s appointed times (feast days) is inescapably clear from a correct analysis of the Bible and The Shepherd’s Rod message. Let not your personal prejudices, or even a group’s ingrained teachings against these statutes deny you from being fitted to meet your king.

One of the prophetic names given the SDA Church during her Laodicean period is “Judah.”

“Your obeying “all the commandments, and the statutes, and the judgments” of the moral law of Moses, you see, is your evidence that you have been born again, that you have been endowed with power from above, that you are enabled to choose the good and to refuse the evil, that you are the children of God. Keeping the commandments and the statutes in the Lord, then is the light and shield of your life. It is the outward sign that by the life of Christ you have overcome the Enemy of your soul and body. This system of worship, therefore, is truly the Righteousness by faith that brings the righteousness of Christ in the people of God. Let us now with ears wide open hear the crier’s bell:

“Isa. 52:1, 7 — “Awake, awake; put on thy strength, O Zion; put on thy beautiful garments, O Jerusalem, the holy city: for henceforth there shall no more come into thee the uncircumcised and the unclean…. How beautiful upon the mountains are the feet of him that bringeth good tidings, that publisheth peace; that bringeth good tidings of good, that publisheth salvation; that saith unto Zion, Thy God reigneth!”

“Nah. 1:15 — “Behold upon the mountains the feet of him that bringeth good tidings, that PUBLISHETH peace! O Judah, keep thy solemn feasts, perform thy vows: for the WICKED shall no more pass through thee; he is utterly CUT OFF.”

“Here the prophetic Word of God plainly declares by both Isaiah and Nahum the prophets that when we see these good tidings published by him whose feet are seen upon the mountains (and this is now taking place for the first time since the prophets wrote), it is to be a sign that the wicked, the violators of the laws of Moses, are soon to be cut off from among God’s people.  And now, since you are privileged to hear all these things, “happy are ye,” says the Lord, “if ye do them.” Job 13:17. Timely Greetings, (Vol. 2, No. 37: 24,25)

To subscribe yourself or a friend to these posts, contact Garrick Augustus at Gaugustus336@gmail.com, or write to P.O. Box 961 Dumfries, VA 22026

You may also join our weekly Bible Study class from any place on earth:

By Web-conference: https://www.freeconferencecall.com   To listen to the web conference, all callers must dial the telephone number given above to hear the presentation

Donate to our ministry at: info@heraldsoftheking.net