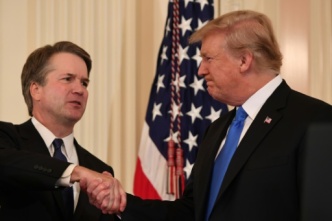 We have all heard the anger, watched the vitriol played out, experienced the bruising confirmation process, and seen the Senatorial votes decided in his favor, without realizing that Brett Kavanaugh’s appointment was a central link in the chain of the Great Conflict of the Ages!  What does the Voice of Prophecy for today have to say regarding the appointment of justice Brett Kavanaugh to the US Supreme Court?  That story forms the feature article of the current edition of The King’s Journal, which was first written and published on July 10th, over 70 days before his confirmation to the bench of America’s highest Appellate Court.  This story is worth reading for “there is a God in heaven that revealeth secrets, and maketh known to the”  children of men today, (Dan. 2: 28), as verily as He did in Daniel’s day, the truths of His word and of the things that are coming upon the earth, thereby preparing a people for His Kingdom.

Love him or hate him, Donald Trump will go down in history as one of America’s most consequential presidents, and when he wins a second term in 2020, the light will turn on in the minds of many, that “America is truly Great Again”–great enough to lead the world by force into a religio-economic stranglehold called “the Mark of the Beast” system.  Only a “GREAT” nation can muster the military and economic clout to mandate that even earth’s “great” must conform to its international decrees and policies:

Mr. Trump has already appointed two Supreme Court Justices, and he still has another 6 years left in office!  Six years?  Yes,  Donald Trump will be a two-term president, and he’s now closing the second of his eight-years in leading this “great” nation and the world!  It is likely that he will single-handedly appoint the most Supreme Court Justices to the High Court, more than any other President in the history of the United States (POTUS).

At just such a time when the Third Angel’s Message should be sounding a clear note, we read with alarm, the following headlines: Seventh-day Adventists Join Hands With Jesuits and Evangelicals in Unity Conference

“And let it be remembered, it is the boast of Rome that she never changes... Protestants little know what they are doing when they propose to accept the aid of Rome in the work of Sunday exaltation. While they are bent upon the accomplishment of their purpose, Rome is aiming to re-establish her power, to recover her lost supremacy. Let the principle once be established in the United States that the church may employ or control the power of the state; that religious observances may be enforced by secular laws; in short, that the authority of church and state is to dominate the conscience, and the triumph of Rome in this country is assured.”– Ellen G. White, 1888, Great Controversy, p. 581.

Equally shocking too, is that this end-time church of prophecy has been experiencing an attitude adjustment, and is now actively reeducating its 20-million-plus membership regarding this “posture shift.”  Learn how the SDA Church is changing its educational deliveries in the areas of gender and human sexuality, from Cradle-Roll to Medical School: https://www.leadthemhome.org

WARNING!  Posture-Shift is coming to a church and a Church-School near you.  Are you prepared for the new changes being worked up by the General Conference?  Be watchful, prayerful, and wise as a serpent, yet harmless as a dove.

“The Hour Of His Judgment Is Come”

Today, October 19, 2018, is the 10th day of the 7th Biblical month. Does this date have any significance to us, as Adventists–a people declaring the Second Advent of our Lord in power and great glory?

Prophecy teaches that we are living in “the hour of His judgment” (Rev. 14: 6), and so, these annual events are constant reminders that we are today living in “the great antitypical day of atonement,” when every soul must be afflicted before a just and holy God.